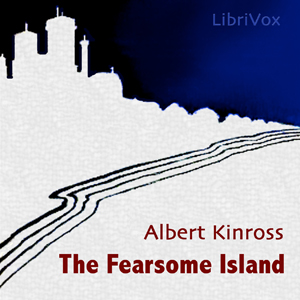 LibriVox recording of The Fearsome Island, by Albert Kinross. Read by Ruth Golding. No ordinary sailor's tale, this. Based allegedly on the real experiences of Silas Fordred, Master Mariner of Hythe, this is a story of shipwreck on an uncharted island and his supernatural adventures there with a witch, a hairy man, and various devilish devices and traps. The author, Kinross, adds an appendix purporting to explain the marvels which Fordred encountered.

Kinross claims to have stolen the sailor's original account from Hythe Town Hall while helping the Town Clerk to sort newly discovered old papers. This is credible, as it is well-known that there were many such documents rescued from destruction in the late nineteenth century. The names of Fordred and his shipmate Snoad are also old-established Hythe families. However, even if Fordred's account is mentioned in the annals of Hythe Borough, it is impossible to know how much was invented by Kinross. "Believe or doubt!" the author says. Much as I would like to believe, I know which way I incline. (Introduction by Ruth Golding) Details of the source text may be found on the LibriVox catalogue page for this item. For more free audio books or to become a volunteer reader, visit LibriVox.org. Download M4B (80MB)

Reviewer: lanternland - favoritefavoritefavorite - February 19, 2015
Subject: Pretty good
Interesting, more or less. My attention did wander a bit at times. More my fault than the book or the reader's I guess. The reader is very good. The other reviews here are also good and I don't have much to add.
Reviewer: stbalbach - - July 29, 2012
Subject: The Fearsome Island

The Fearsome Island is an obscure fantasy work by an obscure English author, Albert Kinross, published in 1896 when he was about 25 years old, his second published work. It probably would remain unknown today except it was recently brought to light by LibriVox narrator Ruth Golding, who is always enjoyable to listen to. The book is novella length and frames itself as a true story about a shipwrecked mariner from the 16th century who discovers an island inhabited by fantastical things. There are overtones of Robinson Crusoe, The Odyssey, Arabian Nights - but really it felt closer to a Dungeons & Dragons adventure from the fertile mind of a teenager with traps, treasure, monsters, etc.. standard genre fantasy escapism. There's really not much to say other than it's imaginative for what it is. I did some deep searching of databases and was unable to find any professional reviews or commentary, then or now. I can only recommend to read the classics it derives from, but if you want obscure late 19th century genre fantasy that is still readable, this will give you a taste beyond Bram Stoker or Jules Verne.